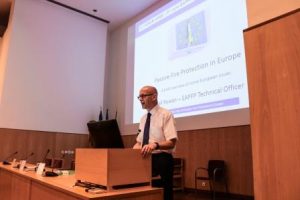 Niall spoke about the value of Passive Fire Protection in saving lives and property and showed several examples of where Passive Fire Protection had worked successfully. He moved on to speak about the single European market for passive fire protection products and the need for a common technical language which could be used by all Member States when setting regulations. The common technical language would encompass both European Technical Assessments and compliance with harmonised European product standards.

He also spoke of the work of CEN TC127 in developing European fire test methods for passive fire protection products and how these were used to support CE marking which allows cross border trade without the need for duplicate testing in each Member State.

Finally, he described the EAPFP and explained its role in providing a strong focus for the industry to debate and provide a common European position on matters relating to fire testing. This includes being a stakeholder on the recent European Commission consultation on regulating construction products for smoke and toxicity; developing an EU wide position to promote EU standards worldwide; and supporting the Standardisation Request for many passive fire protection products to become regulated using harmonised European products standards and thus make CE marking mandatory.