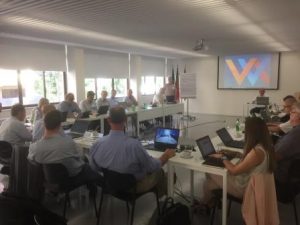 EAPFP members enjoyed an interesting meeting in Lisbon, Portugal on 7-8 June, where the Association’s latest activities were discussed and plans for the remainder of the year developed.

During two days of wide-ranging debate the delegates looked in detail at the main concerns and activities within each state to identify where progress could be made by sharing knowledge and experience and through campaigning at a pan-European level.

EAPFP members expressed support for the Construction Products Regulation (CPR) amid concerns that proposals from a CPR Technical Platform Workshop to be held on 21 June could lead to a total repeal of the CPR. The EAPFP developed a position paper which was presented to the Workshop. This stated: â€˜EAPFP strongly believes that the CPD and CPR have contributed to removing barriers to trade in Europe.

Consequently, either repealing the CPR or degrading its requirements is not supported by the passive fire protection industry. EAPFP supports a progressive harmonisation towards a real European free trade zone via the CPR which uses a common technical language and harmonisation of safety performance characteristics.â€™

Concerns were also voiced about the widespread use of performance-based structural fire engineering in the design of medium and high rise buildings. The EAPFP developing a position paper on the practice in which it will highlight a number of its concerns, particularly the apparent misuse of structural fire safety engineering to reduce levels of fire protection, particularly passive fire protection, within such buildings.

While the EAPFP appreciates and acknowledges that performance-based designs can provide a rational approach, especially for buildings for which the conventional prescribed solutions are difficult or impossible to apply, it believes that a number of issues should be considered and addressed before moving forward with structural fire engineering on a broader scale.

Commenting on the Associationâ€™s activities, EAPFP President Joric Witlox declared:
â€œHaving identified several key areas of concern across Europe, the Association is now actively campaigning for further harmonisation of standards for fire protective products and looking to offer guidance to the industry on raising standards of fire protection in new and existing buildings alike.â€